Staring to brainstorm ideas for the sequel to The Universe is a Very Big Place. For those of you who haven't read it, its a romantic comedy (emphasis on comedy). Thinking of names for the worst restaurants and food concept establishments in a small town environment. Here are the ones that didn't make the cut.

April Aasheim is the author of The Witches of Dark Root (3.49)
and The Universe is a Very Big Place (2.99). Both available on Amazon.

It's official. Today I finished the first draft to the sequel of The Witches of Dark Root. It is 93,000 words long and I was crying at the end.

Now to put it away for several weeks and then take it out again, to begin the arduous process of the second draft. The first draft is creative but tough, the second draft, at least for me, is brutal.

At least for the next few weeks I can work on other things now that my head isn't tied into the book. Updating my blog is high up on my list.

For those of you who keep asking: The Magick of Dark Root probably won't be available until at least May. If I put it out now I doubt you could read it :)

Thanks for all the support! 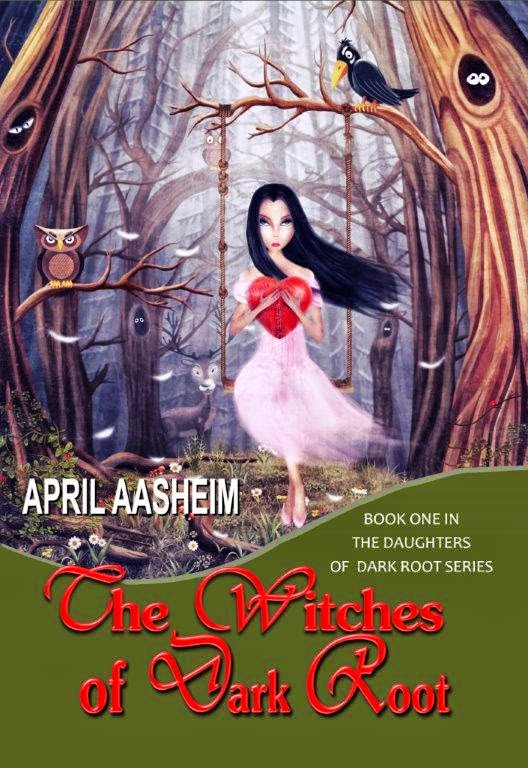 Things my husband has said to me this week:

What's a hashtag and where can I get me some of them?

I'm not bald. Bald is when your hair falls out. I shave my head. I'm bare.

Where do we keep the lunchmeat?

We have conversations all the time. You talk to me with the expectation that I will listen. That's a conversation.

How do you cook a hotdog?

My cat weighs 11.5 pounds. I'm not sure if that's good or not. Hes about 10 months old and steadily gaining. Of course, when you're a cat, one pound makes a difference between svelt and obese. Kinda like my five foot frame. Maybe I need to put us both on a diet.
at January 10, 2014 No comments:

Life is short. Don't waste it trying to prove your worth to others. How you feel about yourself is the only thing that matters.
Love wildly, with abandon, and without expecting anything in return.
Cry at sad movies and cheer inappropriately at the ends of really great ones.
Read poetry in the rain. Revel in the words of those who came before you.
Dance to your favorite songs, even if the music is playing only in your head.
Share your wisdom but accept that every person has to find their own path and their own way. Nothing teaches like experience.
Do something silly at least once a day. Twice on Saturdays.
Wear bright colors on the days you don't want to be seen.
Ask someone about their story. You'd be surprised what you may learn.
See the world through the eyes of a child. Innocence is our only salvation.
Eat chocolate before dinner.
Do something that's not on your to-do list. Better yet, crumple up your to-do list. Make a to-be list instead.
Speak honestly but kindly.
Treat yourself with compassion. There is only one you.
And you are a light in the world.
at January 05, 2014 No comments:

My Favorite All Time Reads

Just compiling a list of my all time favorite reads as I start my new year. I'm hoping that by next year I will have even more books that will have such lasting effects as these have had on me.

On the Road: So I only read this last spring but I have a feeling this one will stay with me a long time. The narrators passion and exuberance for life and adventure make him a sympathetic character, even when he's doing things that shouldn't evoke sympathy. This book stands the test of time.

Gone with the Wind: I first read this book when I was 16, then again at 24. Now a full-fledged adult (complete with cellulite and a mortgage) I tried reading it again to see if it was really 'all that'. And yes, it was. Mitchell is a marvelous writer who makes an unlikable character likable and transports you back into another era. I realize there's content we may not find politically correct nowadays, but I'm a firm believer in not censoring something or pretending it didn't exist. It is only through reminders of how things used to be that we make any progress at all.

Wuthering Heights: More unlikable characters but I was rooting for Heathcliff and Cathy the entire book. They are reckless, careless, and terribly in love but, because of Catherine's pride, are kept apart. It is only in death that they are able to be together. Over the top? Yes. But deliciously so.

Fingerprints of the Gods: Before there was Ancient Aliens on TV there were books like Graham Hancock's Fingerprints of the Gods. This book makes the case that at one time there was an advanced human society walking the earth destroyed by a massive flood. Atlantis anyone? This book changed the way I looked at everything. Looking forward to the sequel.

Alice's Adventures in Wonderland: I read this when I was 14 and though I couldn't get all the political humor, I knew, even then, that it was a work of art. Jabberwocky is still my second favorite poem (right behind The Raven) and I can still flip through the book and find a passage that is relevant and interesting. This is a book with layers that both children and adults can appreciate.

Fried Green Tomatoes at Whistlestop Café: The book that turned me into a lover (and a writer) of women's fiction. Fannie Flagg has a way of weaving humor and drama into all of her books and in my opinion this is her very best work. A story that's both humorous and poignant, a story that still plays through my mind.

Where the Heart Is. Maybe its because I was a teen parent myself who also grew up in 'homes on wheels', but I could really sympathize with Novalee. She proved that your past didn't dictate your future and that as long as you had love you had hope. I reread this book many times when I was seeking reassurance and validation in my own life. It also strengthened my love of
women's fiction.

The Princess Bride (The Good Parts). The story was good and I read the book shortly after seeing it in the theatre with my dad (five times) but what really got to me about the book was the narrators voice. He was real and raw and his words still echo through my head "who says life is fair?" It was a contrast between the beauty of the fairy tale and the stark reality of a real, not quite what we hoped for, sort of life. Lifes not a fairy tale but we can still look to them to pull us through. That's what fairy tales are for.

Clan of the Cave Bear (and its sequels). I was thrilled when I moved to Oregon and learned that Jean Auel is a native. I loved her books and they opened my eyes to a world of human ingenuity and determination. In the later books I think they gave Ayla credit for far too many things, but her character and her world was still so interesting. I even named my half-wolf dog Ayla in honor of how much I loved these books.

What Dreams May Come. Yep, Im a weirdo, as for the next month after finishing this story I actually wanted to die and visit this picture of heaven that the author created. I wasn't afraid of death, at least not then. Beautiful book with an important message: we go on.
at January 03, 2014 No comments:

While standing in the checkout line on Christmas Eve with my mother we spy a Time Magazine. On its cover is a giant picture of Jesus.

Mother wanders over to the picture and begins to trace the lines of his hair with her fingers. In a very loud voice she says, "do you know who this looks like?"

At this, the entire line turns in her direction.

There is snickering from the crowd as my mother attempts to sort this out in her brain.
"A famous pool player I used to date. Back when you were a baby."

I hold my tongue. My mom dated a lot of people 'back when I was a baby'. So eager was she to regain her figure and her dating life that I've been told I was weaned while still in the uterus.

"Yes," she says, spurred on by the entire line of last minute shoppers who were her captive audience by now. "How do you think I learned to hustle pool?"

"He put ball bearings in his pool stick to help with balance," mother said, demonstrating as she held an imaginary stick over the conveyor belt, lining it up against three cans of corn. "No one could whoop me when I had his stick in my hands."

At that the crowd behind us burst into laughter and mother repeated, "its true."

"That's nice," I say as the checker calls us to pay for our goods.

"Maybe I should buy the magazine," mother continues, looking at it wistfully and mentally calculating whether or not she can afford the 8.99 asking price. It's a steep price for a senior living on a fixed income.

"Its a lot of money," I say, always the voice of reason.

"Yes," she agrees. "But every time I look at Jesus I can think about my pool hustling days and my old boyfriends. It might be worth it."

Meditations on The Shadows of Dark Root

I may have gotten a bit metaphysical during the creation of The Shadows of Dark Root. I always knew I wanted Maggie and her companions to j...